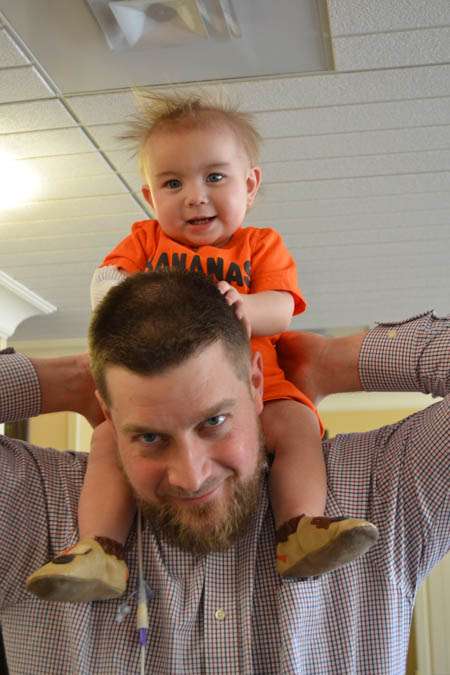 In Philadelphia, in 1969, Fred and Fran Hill kept watch over their three-year-old daughter, Kimberly, as she fought for her life with acute lymphatic leukemia. Tired and sore from sleeping in waiting room chairs, the Hills did not complain about their ordeal, but instead decided to help others. Fred Hill, a tight end for the Philadelphia Eagles, enlisted the support of his fellow players and their wives, as well as Eagles staff, management and owners, and raised a great deal of money for oncology at St. Christopher's.

Through sharing his story with friends and colleagues, Hill inspired a joint promotion between the Eagles and McDonald's Restaurants to raise money to buy a home near the hospital.

By Christmas of 1974, the first Ronald McDonald House had welcomed the families of seven sick children. But this was, of course, just the beginning. Today, there are hundreds of RMHC Chapters operating worldwide.

"A remarkable and somewhat small group of people worked tirelessly to organize, publicize, fundraise, plan and build our Winnipeg House. It was a group comprised of people from all walks of life who bonded together, not unlike a family. We shared responsibilities, successes and failures: we lent support and affection to those among us who experience the loss of a child. Less than three years was required to raise 50% of our project costs, build the House and open the doors," says Adams.

On May 30, 1984, the Winnipeg Ronald McDonald House opened, just down the street from HSC Children's Hospital, at 566 Bannatyne Avenue. With room for 14 families, Ronald McDonald House is a "home-away-from-home" for rural Manitoban and out-of-province families with a child requiring treatment at a nearby hospital.

On September 14, 2022 RMHC Manitoba and its supporters celebrated the Grand Opening of its new Ronald McDonald House facility at 62 Juno Street in Winnipeg. The project brought a 186% increase in mission delivery, growing from 11,000 sq. ft. to 48,000 sq. ft. and from 14 to 40 bedrooms, each with a private washroom. The House includes two kitchens to support meal programs, multipurpose rooms, specialty suites to serve bone marrow and organ transplant patients, secure parking, as well as indoor and outdoor play areas.

From its beginnings in Philadelphia, to our House and Family Room in Winnipeg, to an organization of over 685 RMHC programs across the world, RMHC is truly dedicated to keeping families together when it's needed most.

RMHC Manitoba serves families on Treaty 1 and Treaty 5 lands, located on the traditional territories of the Anishinaabeg, Cree, Oji-Cree, Ojibway, Dakota, and Dene Peoples, and the homeland of the Métis Nation.